defending your mic against an onslaught of noises

When it comes to sound control in your recording space it is unfortunately possible to spend a lot of money and time to try to reduce extraneous noises and still not acheive the desired results.  This is especially true when you're trying to prevent noises created in your workspace from bleeding into your microphone.  Many an audio expert has approached this problem and ended up scratching their head (or tearing their hair out!)  when, after a complete sound makeover, the results are less than optimum.  As mentioned in my sound control for voice over  article the scary sound goblins for a home voice over recording studio are computer noise and room echo.  And many a VO talent has tried to exorcise these two sources of background noise.

treat the room... or treat the microphone?

A while back several enterprising souls turned the problem around backwards.  "Maybe we don't have to treat the whole room" they thought, "maybe we just have to treat the area around the mic.  And thus various forms of vocal booths were concieved.

talent in a box: the true vocal booth

The first attempt at this was an actual vocal booth.  By golly these work well.  They isolate you and your mic from any sounds in the room.  Just a few problems though:

You need a space for it.  It can get hot unless you have some air circulating.  You can't control your computer (unless it's in the booth which defeats the purpose). These are REALLY expensive.  And they are not portable.  So, while these work well for pro studio applications they don't work for home studios where you're the talent and you're also the engineer.

smaller is better:  sound isolation around the mic

The next step was even more minimal.  Why not just "deaden" the area around the mic?  There are a couple of popular variations on this theme.  One is the Mic Thing.  It is a panel with acoustic foam that surrounds the back of the mic to block room ambiance and bleed from other sound sources.  I haven't actually used this but I suspect it doesn't provide enough isolation to block the noise from the laptop on your desk or your plaster walls and ceiling.  I probably works well in studio environments.  It is portable though.  But rather pricey.

And then there's the Harlan Hogan Porta-Booth.  Harlan Hogan is a voice over pro who designed this box for his own use on the road if he had to record in, say, a hotel room and wanted good mic isolation.  It works pretty well and provides good isolation.  I've tried it and I've found it too small to place a mic in with a regular desk stand and the sound seemed a touch muffled.  It's also a bit tricky to position so it's at mouth level.  But it collapses and is a very portable vocal booth.

my design for isolating the mic:  acoustic baffles 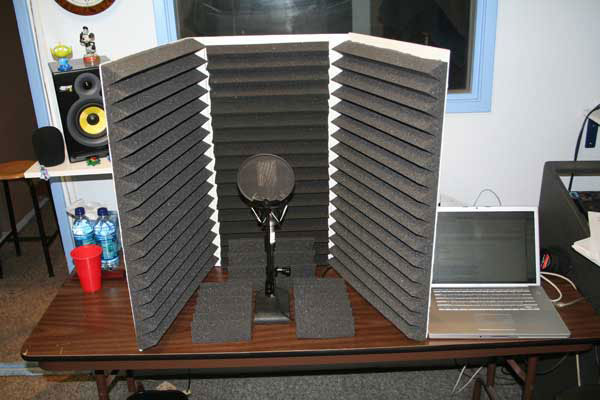 So here's my variation on this theme.  They are acoustic foam baffles that can be hooked together with velcro strips.  These are simple to make and can be used to isolate the mic but still provide enough space to comfortably work with the mic at mouth level when you're seated at a desk or table.  They also stack together for storage or transportation so they are reasonablly portable.

They work in two ways.  The acoustic foam absorbs much of the energy from your voice so it doesn't bounce around the room.  And then the panels block any returning sound from room echo or your computer from reaching the mic.  I've found that they work fine in any typical room with plaster walls and reasonable amounts of furniture, carpet, drapes, etc.

so here's what you need to build your own vocal booth:

Here's are vocal booth plans for making them.  You can vary it to fit your needs:

and how to assemble them:

give this idea a try!

This diy vocal booth costs about $130 and takes a few hours to construct.  And it does a great job in eliminating various sounds that try to sneak into your recording.  So if you're hearing those undesired background sounds, roll up your sleeves and slap one of these together.  You'll be pleased with the results.

... read my blog articles on how to position your home recording workspace and using moving blankets to deaden your recording space.  These will help you get that quiet recording that clients want to hear.